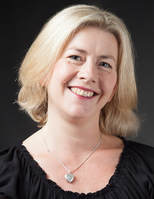 Mezzo soprano Jenny Samuel lives in Hampshire and studied at Birmingham Conservatoire, with Mary King (vocal expert for BBC Cardiff Singer of the World) and she recently gained a distinction for a Masters of Music in performance at the University of Southampton.

Roles include Mrs Noye in Noye’s Fludde, Katisha in The Mikado, Ruth in The Pirates of Penzance, Buttercup in HMS Pinafore, title role in La Cenerentola, Marcellina in The Marriage of Figaro, Berta in The Barber of Seville, Pauline in The Queen of Spades, Kitchen Boy/Third Nymph in Rusalka, Adalgisa in Norma, Zerlina in Don Giovanni, Third Lady in The Magic Flute, title role in Handel’s Radamisto, and Kate Pinkerton in Madama Butterfly.

Jenny also sings regularly for Music in Hospitals and is in much demand as a singing teacher.