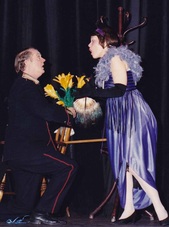 Flefermaus, 1984
The Essenden Ensemble had its origins in Hastings Youth Choir and Hastings Youth Orchestra. Being a bit of a 'maverick', Ken started organising small concerts and events for which he made special arrangements and compositions for motley collections of instrumentalists.

Most of these concerts took place at Holy Trinity Church when those involved were all home from university. Other key people were Phil Williams who also contributed arrangements, Harold Vafeas, Phil Lambourne, Roger Wilcock and Paul Denley who put together The Hastings Baroque Strings for some of these concerts.

A choir was also formed and a more ambitious series of concerts was toured to Bexhill, Rye and Herstmonceux Castle. A small select choir of 8-12 voices called The Essenden Consort was formed which produced a recording in 1979 and had considerable success for some six or seven years until the Opera began to take over.