NODA's Best Opera 2018 - awarded to OSE!
Chairman of Opera South East, John Rycroft, was both delighted and surprised on Sunday 31 March 2019 to receive a NODA (National Operatic and Dramatic Association) Award from South East District Representative, Anne Lawson, at their regular rehearsal last Sunday. Receiving the award for Best Opera 2018 for their production of Tchaikowsky's Eugene Onegin, John Rycroft said that this showed just how much commitment was shown by members of Opera South East and their guest principals in seeking to bring opera of a high quality to audiences in Hastings. “I'm thrilled that this award shows the quality of the performances that we are producing is recognised, and to the dedication to this craft by members of the Company.”

Opera South East's next production will be Verdi's La Traviata, being performed at the White Rock Theatre, Hastings on Friday/Saturday 12th/13thApril, 2019.

NODA Accolade for OSE from 2015 - Accolade of Musical Excellence

On Sunday, 5th July 2015, John Rycroft, Chairman of Opera South East, attended the South East Region NODA (National Operatic & Dramatic Association) AGM, held in the Wessex Arts Centre, Alton College in Hampshire, where he received on behalf of OSE an Accolade of Excellence 2014 for Musical Excellence in OSE's production of Carmen. Each NODA Regional Representative was asked to make the presentation of the awards to the winners in their region in 2015 (by when we had performed our next opera, Il Trovatore), and in doing so Anne Lawson of NODA said "Opera South East are an amazing Company. Just when you think they can't do any better, they crown it with another outstanding performance. They fully deserve this award!" 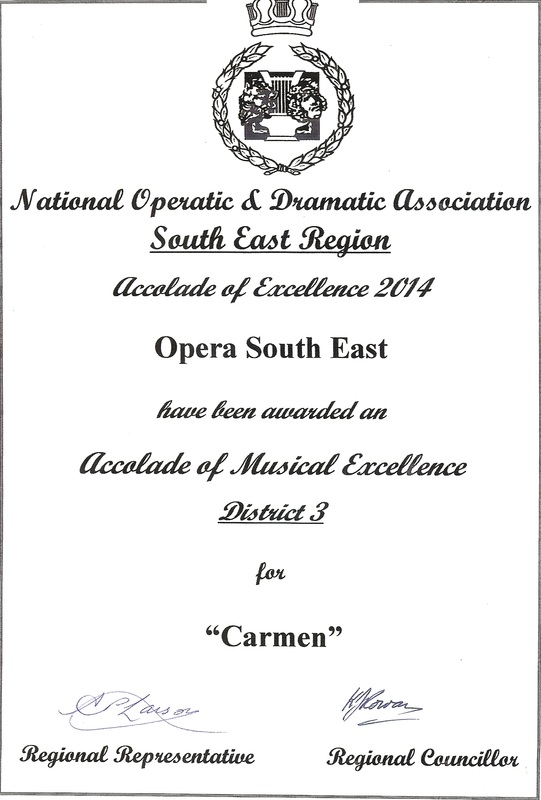