Opera South East presents...
​The Magic Flute – by W A Mozart
Sung in English with Chorus and Orchestra

Opera South East will be performing Mozart's The Magic Flute with the Sussex Concert Orchestra
at Hastings White Rock Theatre on Friday April 7th and Saturday 8th, 2017 at 7.30pm

Kenneth Roberts
​Conductor/Musical Director
​
Kenneth Roberts was born in Hastings and educated at York University where he gained BA and MA degrees in music. He works as Musical Director for numerous companies at home and abroad and has conducted over 250 opera, ballet and other theatrical productions. He has played and conducted at many prestigious venues including The Royal Albert Hall, The Festival Hall, The Britten Theatre, Kensington Palace and Hampton Court. His second opera, Mister Butterfly, which he wrote in 1994 was premiered in Hong Kong and subsequently performed at the Edinburgh Festival, and featured in a documentary shown by BBC television and BBC World Service Satellite. Between 2001-2011 he worked at the University of New Hampshire, USA, where he directed a new African Musical which he was commissioned to write and also composed music for an award-winning ‘international’ children’s piece. He was also musical director and conductor for Plymouth State University’s Educational Theatre Collaborative. In 2002 he fulfilled a commission from the Purcell School in association with the Vaughan-Williams Trust as part of their centenary celebrations to mark the birth of Sir William Walton and in 2005 he completed a commission to write a ballet based on the novel The Trumpet Major by Thomas Hardy. In 2010 he also contributed music for the recently published musical version of 'Pollyanna' and also became a BIFF (British and International Federation of Festivals) adjudicator.
His highly acclaimed reduced orchestral arrangements of operatic scores by Mozart, Rossini, Verdi, Puccini and others are currently being played all over the world and are available from www.smallscores.com
In between times he has enjoyed giving his series of lecture recitals around the country at music clubs, and on cruise liners on subjects ranging from Mozart to ‘Jelly Roll’ Morton and has just released a CD of piano music entitled ‘Around the World in 80 Minutes’.

A fuller biography of Ken can be found here...﻿

Previous roles include: Schaunard/La Bohème (Focus Opera and Lambeth Orchestra), Figaro/Il barbiere di Siviglia (East London Opera), Falke/Die Fledermaus and Aeneas/Dido and Aeneas. In 2015, James was selected for the Georg Solti Accademia, where he received coaching from Richard Bonynge on the study of bel canto arias.

Fae Evelyn
Queen of the Night (mother) -  The Headmistress

During her two years in Manchester, Fae performed Geraldine in Barber’s A Hand of Bridge, Valencienne in Lehar’s The Merry Widow, and Second Woman in Purcell’s Dido and Aeneas.  In opera excerpts at the RNCM she played Helena in Paride ed Helena and Iphigenie in Iphigenie en Tauride by Gluck, and Äanchen in Der Freischütz by Weber. She was also a chorus member for productions of Handel’s Belshazzar, Mozart’s La Clemenza Di Tito, and Bizet’s Carmen.

In 2012, Fae moved to London. Highlights of the last two years include playing the title role in Susannah by Floyd, and Rosalinde in Strauss’ Die Fledermaus, in the Spring Opera Programme Showcase highlights with Associated Studios. She was a member of the 2013 Holland Park Chorus for Puccini’s Madama Butterfly, Bizet’s Les Pêcheurs de Perles,  and I gioielli della Madonna by Wolf-Ferrari and singing the role of Second Niece in Britten’s Peter Grimes with Elemental Opera. Additionally, she performed the role of Countess in Mozart’s Le Nozze Di Figaro in Associated Studio’s Showcase for the Three Month Intensive Opera Course.

Fae is currently an ENO Extra Chorus Soprano, and is working with Graeme Danby as her principal tutor. This summer, she will be performing as a member of the Grange Park Opera Chorus in Don Quichotte, Massenet, and La Traviata, Verdi.

Marina Ivanova​
Papagena (in love with Papageno) - the School Librarian

​Bulgarian soprano, Marina Ivanova read European Economics and French at the University of Kent, Canterbury. Marina was a holder of Music and Performance scholarship, studying with Peter Cox. Marina received the University of Kent Music Prize 2012 and the Canterbury Festival Price 2014 for making an outstanding contribution to music. She now studies with Michell Harris. As a concert soloist Marina has performed at Canterbury Cathedral, Gulbenkian Theatre, Colyer-Fergusson Hall, St James's Church, London and more recently in Leichlingen, Germany. Marina made her operatic debut at Brent Opera, London as the Singer in Puccini's Manon Lescaut. Her solo repertoire includes Mozart Requiem, Haydn The Creation, Vivaldi Gloria and Nulla in Mundo Pax Sincera and Schubert Shepherd on the Rock. Marina is currently appearing as Papagena in South East Opera's production of Mozart's The Magic Flute. 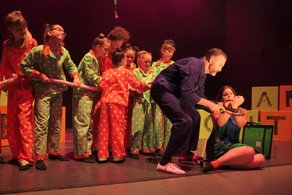 Noted for his strong stage persona, which aided a more recent into character tenor repertoire, he sang Orlofsky Fledermaus for Opera della Luna, and played his first Gilbert and Sullivan, with the Learned Judge Trial by Jury and Joseph Porter HMS Pinafore with Heritage Opera and Opera South East, and Major General Stanley Pirates of Penzance for Opera Anywhere.

The Magic Flute - Synopsis of the plot, act by act

The synopsis of an opera is always worth reading before an opera performance, so do buy a programme on the night and get there in time to read it.
The programme will also contain some gaelic translations that you may find helpful to better understand the set!

ACT I
A mythical land between the sun and the moon. Three ladies in the service of the Queen of the Night save Prince Tamino from a serpent. When they leave to tell the queen, the bird-catcher, Papageno appears. He boasts to Tamino that it was he who killed the creature. The ladies return to give Tamino a portrait of the queen’s daughter, Pamina, who they say has been enslaved by the evil Sarastro. Tamino immediately falls in love with the girl’s picture. The queen, appearing in a burst of thunder, tells Tamino about the loss of her daughter and commands him to rescue her. The ladies give a magic flute to Tamino and silver bells to Papageno to ensure their safety on the journey and appoint three spirits to guide them.

Sarastro’s minion, Monostatos, pursues Pamina but is frightened away by Papageno. The bird-catcher tells Pamina that Tamino loves her and is on his way to save her. Led by the three spirits to the temple of Sarastro, Tamino learns from a high priest that it is the Queen, not Sarastro, who is evil. Hearing that Pamina is safe, Tamino charms the wild animals with his flute, then rushes off to follow the sound of Papageno’s pipes. Monostatos and his men chase Papageno and Pamina but are left helpless when Papageno plays his magic bells. Sarastro enters in great ceremony. He punishes Monostatos and promises Pamina that he will eventually set her free. Pamina catches a glimpse of Tamino, who is led into the temple with Papageno. 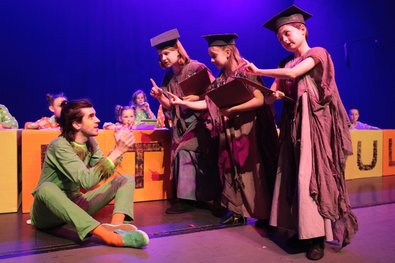 ACT II
Sarastro tells his associates that Tamino will undergo initiation rites. Left alone in darkness, Tamino and Papageno are accosted by the three ladies who want to know why they have not rescued Pamina. The ladies are chased away by thunder and lightning. Meanwhile,  Monostatos tries to kiss the sleeping Pamina but is surprised by the appearance of the Queen of the Night. The Queen gives her daughter a dagger and orders her to murder Sarastro.
​
Sarastro finds the desperate Pamina and consoles her, explaining that he is not interested in vengeance. Tamino and Papageno are told by a priest that they must remain silent and are not allowed to eat, a vow that Papageno immediately breaks when he takes a glass of water from a flirtatious old lady. When he asks her name, the old lady vanishes. The three spirits appear to guide Tamino through the rest of his journey and to tell Papageno to be quiet. Tamino remains silent even when Pamina appears. Misunderstanding his vow for coldness, she is heartbroken.

The associates inform Tamino that he has only two more trials to complete his initiation. Papageno, who has given up on entering the brotherhood, longs for a wife instead. He eventually settles for the old lady. When he promises to be faithful she turns into a beautiful young Papagena but immediately disappears.

Pamina and Tamino are reunited and face the ordeals of water and fire together, protected by the magic flute.

Papageno tries to hang himself but is saved by the three spirits, who remind him that if he uses his magic bells he will find true happiness. When he plays the bells, Papagena appears and the two start making family plans. The Queen of the Night, her three ladies, and Monostatos attack the temple but are defeated and banished. Sarastro blesses Pamina and Tamino as all join in hailing the triumph of courage, virtue, and wisdom.